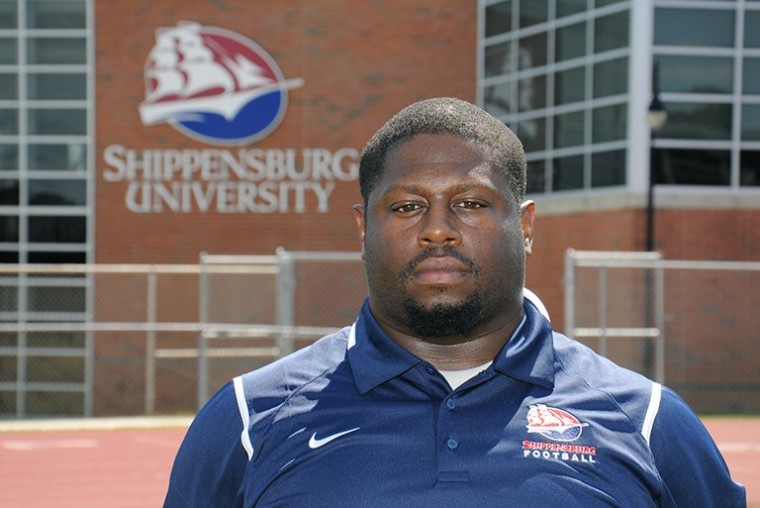 Tony Johnson is in his 13th season on the SU staff in 2018. He contributes to special teams work but primarily provides instruction to the defensive backs alongside his former position coach, current head coach Mark Maciejewski.

In 2015, Shippensburg’s defense led NCAA Division II with a +20 turnover margin – a feat that included 20 interceptions. All four starting members of the SU secondary finished the season with multiple interceptions, while SU’s defense tied a school record with three “pick-sixes” on the year.
Of SU’s special teams work in 2015, the Red Raiders set myriad records thanks to the work of Sheldon Mayer. Of his numerous achievements, Mayer broke single-game, single-season and career records for punt return average and punt return touchdowns, while the Red Raiders ranked third in NCAA Division II overall for punt returns.

At the conclusion of the 2013 season, all four starters in SU’s secondary had earned at least one All-PSAC classification from the league’s coaches. In 2012, SU intercepted 20 passes and scored a school-record six defensive touchdowns.

One of the most exciting players in the PSAC during his career, Johnson was a four-year letterman for the Red Raiders from 1999-2002, serving as a team captain as a senior. He played in all 44 of Shippensburg’s games during his career, totaling 180 tackles, 31 pass breakups, six interceptions and eight blocked kicks which ranks third all-time in school history.

As a junior in 2001, Johnson was involved in five blocked field goals, three of which he blocked himself. He returned two for touchdowns to set a new Shippensburg single-season and career record for blocked kicks.

In the season finale at Kutztown, the score was tied with less than two minutes to play when Johnson blocked a field goal attempt and raced 72 yards for the touchdown to give Shippensburg an eventual 24-23 victory.

Johnson added 53 tackles, three interceptions and six pass breakups in 2001 while serving as the team’s leading punt returner with an average of 6.4 yards per return.

In 2000, Johnson used his knack for blocking kicks to lead the Red Raiders to a 17-14 victory at East Stroudsburg. After he recovered a Warrior fumble in the end zone to tie the game at 14-14 and send it into overtime, Shippensburg held a three-point lead when Johnson blocked an East Stroudsburg field goal attempt to win the game. He was PSAC Western Division Defensive Player of the Week for his performance.

In addition to his career-best 59 tackles, he had a team-high seven pass breakups, two blocked kicks and an interception return for 48 yards versus California (Pa.) that led to a Red Raider touchdown. Also that game, he blocked a field goal to preserve Shippensburg’s 30-0 shutout victory.

A native of Dover and 1997 graduate of Dover High School, Johnson also ranks second in Shippensburg history for pass breakups in a season, totaling 13 in 2000, and a career with 31, second only to current Tampa Bay Buccaneer Brent Grimes, who had 37.